It wasn’t until just today that it occurred to me, that of the 11 Friday the 13th films, not one of them is set at Christmastime. And while that’s fine, it seems like a missed opportunity. Doing the usual thing, but with a holiday theme, would be a easy sequel gimmick.

So I just picked one randomly to watch tonight, and ended up going with part 9: Jason Goes to Hell. Well, maybe not entirely randomly. I partly chose this one because it’s my least-watched entry in the series. I’m reasonably sure I’ve only seen it the one time. Twice at the very most. 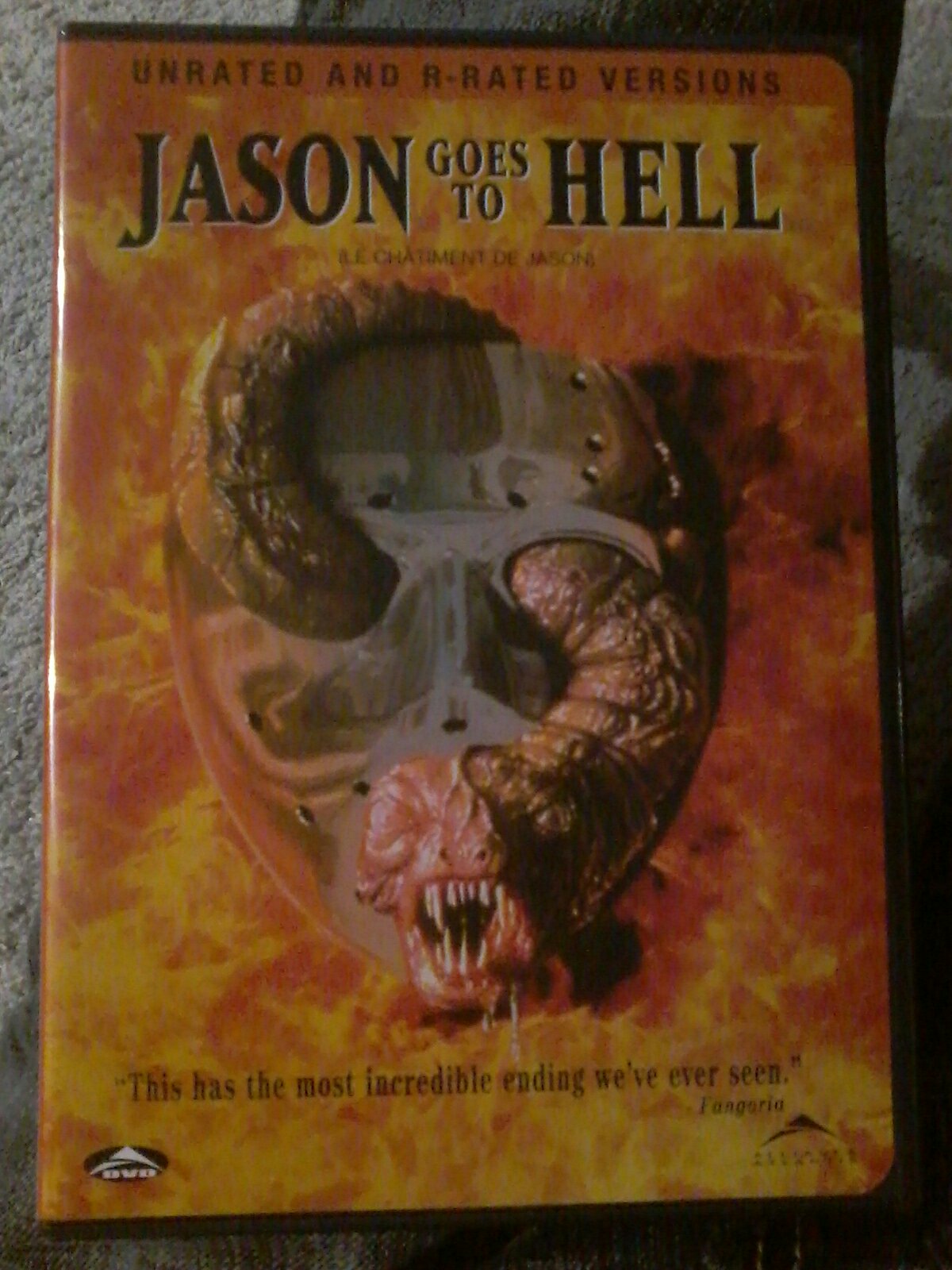 There are lots of things to say about Jason Goes to Hell, but the important one is that it’s probably the most creative sequel of the bunch, narratively (I’d listen to arguments in favour of Part 5, though). This film posits that Jason is not, in fact, an immortal zombie who is back again, but rather a demonic being that can hop between bodies as necessary. They don’t use the body-hopping conceit as effectively as they could have (there’s never even an attempt at hiding Jason’s identity), but at least it gives a slightly less flimsy excuse than usual as to why he’s always back again.

The film kicks off in an unorthodox fashion, with the FBI trapping and exploding Jason into itty-bitty giblets. This is interesting, because it goes against the tried-and-true horror trope of nobody but the protagonist believing that the monster is real. This suggests that Jason’s rampage in the previous film (Jason Takes Manhattan) was severe and public enough that the government was forced to acknowledge it and take action. And I find that fascinating. Because I love overthinking silly horror movie plots.

Then it goes into some voodoo malarkey about how Jason had a secret sister, and that only someone from his bloodline can kill him for real. And now that the audience knows this, Jason does a hard pivot after a decade of random murder and starts homing in on his sister and niece. It’s also noteworthy that Jason has never been quite this smart before, as he uses his new body-snatching ability to strategically get himself close to his prey without drawing too much attention.

The body-swap is also very bad news for whoever is on the recieving end. Getting posessed by a murder-zombie is bad enough, but when he moves into a new person, the previous host regains consciousness for a minute before slowly and painfully melting into a puddle of goop. But it should be no surprise thag having an evil spirit take up temporary residence inside you will take a real toll on your body.

Anyway, Jason Goes to Hell might actually be one of the best Friday the 13th films just by virtue of having an actual plot. It’s not a great plot by any metric, but it gives the characters real motivation. This in turn means that there’s more to this movie than just waiting to see what creative way Jason uses to kill the next hapless teen. This may be the only sequel in the series where the plot doesn’t just get in the way of escalating kill scenes. I was hoping to exclaim that it also has character development, but no, that doesn’t happen. The main guy has a soft arc where he learns to stop being a coward, but that’s really it.

If I have to level one complaint at Jason Goes to Hell, it’s going to be that the final scene straight up doesn’t work anymore, due to the ravages of time. At the end, our heroes walk away into the sunrise as the wind blows dust and debris over Jason’s mask – all that is left of him after he’s pulled down to Hell by a throng of It From The Pit hands (amazing scene BTW). It’s at this point that the canny horror fan will expect Jason’s hand to rise from the earth and reclaim the mask, assuring audiences that another sequel is on the way. But we get a curveball when instead it’s Freddy Krueger’s hand that emerges and pulls the mask into the ground with his signature cackle. No doubt this was a major surprise back in 1989, but now that Freddy vs Jason has happened (and how long it took to happen), there’s no shock value and you’re just left thinking about how it doesn’t make any GD sense from a lore perspective.

There actually was something else that I thought warranted criticizm, but I forgot what it was while writing the previous paragraph, so I it couldn’t have been especially bad. There’s a ridiculous scene near the end where Jason is reborn with a fresh, new… decaying zombie body… but I actually like that scene because of how stupid it is.

At the end of the day, the important thing is that I’ve gained a new appeciation for this film. I may be one of the few, though, as Jason Goes to Hell was not well-received by critics (obvi) or regular filmgoers. They called the plot incoherent and didn’t like the supernatural angle, but I think that as the ninth entry in a series with little in the way of innovation, it was a noble attempt to try to add a little freshness. Maybe they didn’t stick the landing, or a lot of what came before the landing, but I like that someone cared enough to try.